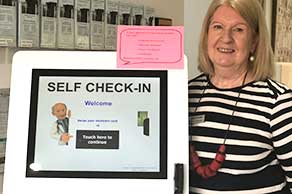 In the 30 years Maureen Goss has been working at East Brunswick Medical Centre she has seen a lot changes in the types of patients that come in, the GP workforce and how technology is used to help.

Always innovative, East Brunswick was one of the first companies to put a Medtech Kiosk into their practice.

Taking the load off with a Medtech Kiosk

“We bought the kiosk to help ease the workload for the girls at reception.  It was really about improving the workflow and easing the backlog of people trying to check in and check out,” said Maureen when asked why she decided to purchase their kiosk.

In order to get the most out of a kiosk, Maureen suggests a clinic should be “reasonably busy”, the kiosk well signed and branded with the practice’s logo, and positioned properly so people can see it and know to use it as soon as they enter the clinic.

“You have to put some time in to help show people it is there and how to use it,” Maureen said.

“As more and more places like Medicare, Centrelink and the banks are making people use kiosks people are getting more and more used to them and it is becoming the norm.  Some people will never use it, like some of the older people who like to come in for a chat.”

“Some patients were also worried about the girls losing their jobs, but once we explained to them and they could see how busy they are and how it will actually help them, they stopped worrying about it,” she said.

A lot changed in East Brunswick in 30 years

Maureen started working at East Brunswick in November 1988 in a little house when there was just one doctor and a largely migrant community.  They are now a thriving 10 doctor practice and the surrounding demographics have completely changed.

“Where there was once a single story house, they are putting in six apartments with no car parking and we are genuinely concerned what this will mean as the infrastructure here is already struggling to cope,” she said.

“People now are predominantly young professionals but we are also seeing some of the people who moved away to the suburbs to have families retiring and coming back to the area,” she said.

“There are also more female doctors choosing to be GPs whereas it used to be mostly men,” she noted.

“Also patients used to latch onto one doctor and stick to them.  We are finding younger people are more loyal to a particular practice and not as concerned whether they see the same doctor.”

All of these changes mean more opportunity for technology like online appointments and kiosks to add significant value to patients and staff.

To find out more about the kiosk and whether it is right for your clinic, contact us on salesau@medtechglobal.com, 1800 148 165, or request a demo with the button below.

Tags:
Back to Top

Get the latest news in your inbox!

We're not around right now. But you can send us an email and we'll get back to you, asap.